Understanding What the Apostle Said About Women in Gatherings

HIS Church, by His Word, will crash down the walls of Hell itself, rather than “conform to the patterns of the world” and lose teens, and marriages, and perpetuate the Spiritual babyhood of so many men.

These thoughts that follow were written almost twenty years ago, as the first Handful of Saints in this city were first beginning to seek out Father’s Heart for what a Christian and a Church truly must be, according to His Oath and Word. Many of us had witnessed, from inside of “leadership” positions and not, the massive contradictions, hypocrisies, marketing and sales jobs, out and out evil sins and divisions “brushed under the rug” in both religious institutions and “house churches,” which are generally no different and no better. Know that “GOD don’t make no junk” and that if HE is doing the Work then “the gates of Hell cannot prevail” as they do in those aforementioned environments. We were NOT interested in falling into the same traps and the same ways that have yielded such pathetic fruit over the years. HIS Church, by His Word, will crash down the walls of Hell itself, rather than “conform to the patterns of the world” and lose teens, and marriages, and perpetuate the Spiritual babyhood of so many men. As Isaiah prophesied over the cursed and disobedient Israel of his day, “women and children will rule over you” as I take away all of your Anointed and Gifted men, and you will say “You have a cloak and are wealthy and a good businessman—you be our leader.” A sad commentary, and infinitely applicable in our present day. We did NOT want any more of that nonsense that wears Jesus’ Name, but contradicts everything about Him. Singing louder or a better “worship band” or “sermon” or “building” or “program” or “more informal where more people are allowed to talk” has NEVER solved the ROOT Issues of the Spiritual demise of most “groups” caused by leaven and lukewarmness and schisms and unBiblical hierarchies.

Accept no counterfeits of His Grace and Wisdom.

With the heart of not repeating the evil and leavened history of much of the last 19 centuries, we will address a topic that needed to be addressed twenty years ago, as we were seeking to find our footing in many areas of Life. One “topic”—“Woman’s Role in the Church”—has caused much consternation in many countries, we’ve noticed. Due in some places to a faulty “culture” that puts down women in general society (and is carried over improperly into God’s Culture), women are made to be “second class citizens” and a “caste system” robs them of their Rightful inheritance, and robs Jesus’ Body of their Gifts. In other places, generally in the West we’ve noticed, the egos of the “women’s lib” culture has improperly and unBiblically over-reacted to being “put down” and they have tried to rationalize and excuse away many Scriptures, playing games with Greek and Hebrew word studies to attempt to build an empire that is, in the end, not of God’s making. There is NO doubt that our Father has a Plan of distinct but equal roles of men and women, as surely as man was created from dust and woman from the man’s rib. And IF we continue to “fuss” against God’s Plan, erring in EITHER direction, we have no more hope of seeing God’s Ways lived out in His Bride in a visible daily “equal yoke for the Son” sort of way than we could just snoozing in the back “pew” of an institution. In fact, the “pew” would be far less painful than most self-proclaimed “more organic” situations will be if egos and pseudo-scholarship (masking prejudice and agenda) rip through a group of Believers, spouting off their “theories” of “women’s role” or “eschatology” or “evangelism” or blah blah. It’s MUCH safer in the “pew” than to go through that nonsense.

In twenty years here, with large numbers of people from diverse backgrounds (including many ex-seminarians and ex-pastors and those with “something to lose”)… we have never had a “split” or even an impasse on topics such as these. We need to say that, because satan has just about conditioned everyone to “expect the worst” and quote his utter darkness of “bloom where you’re planted” and “work from within” and “agree to disagree”—rather than for 100% of those who wear Jesus’ Name EXPECTING “unity of the Faith” and “the full knowledge of the Son of God” and “no longer infants, tossed to and fro.” It is not only proven to be POSSIBLE, but it is God’s MANDATE. Be There, or be square. Accept no counterfeits of His Grace and Wisdom. Counterfeits are so easily available and franchised today, born out of men’s techniques and personalities and ambitions. You’ll end up regretting being a part of something like that, and be tempted to lower your Vision of what GOD is after, “the Bride who has made herself ready” for the Return of her Groom. 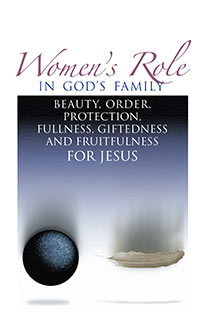